Library North is a former station on the North-South Mainline. The station sits just outside the Central Rail Authority network, but all services and signalling on the line are operated by the CRA. The station is built primarily of oak planks, and is notable for its short platforms, which previously resulted in the first and last carriage of stopping trains being off the platform.

The May 2020 server upgrade caused a chunks issue which resulted in Library North station being shifted one chunk to the west. The building was temporarily closed for restoration; however, due to its short platforms and proximity to Kippenberg station, it was never reopened. The station has since been removed from the network and all trains pass through without stopping. 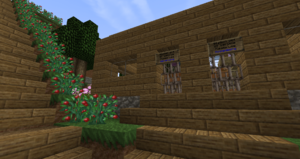